Moving To A Place With A Small Kitchen 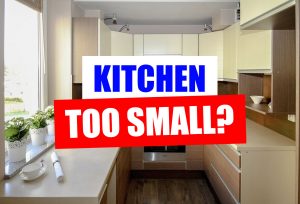 Looking for a new place can be challenging. Depending on where you want to move, you may have to make certain compromises, otherwise you will probably not find anything at all. But people know that, so they naturally gravitate to cutting some of their desires.

Oftentimes the first to go is a decent kitchen. While many folks have it on the list of things they want in their new place, they do not place that much of a priority on it. But it can still bug a lot of you out there. Even when you are already considering booking your favorite Chicago movers, you are not so certain about that kitchen.

Don’t worry! We have some tips for you, which will help you accept the idea of a smaller cooking space. You may even start to enjoy it altogether! Let’s take a look at what we have to share!

If you are used to a bigger space, you will soon learn that you cannot leave everything on the counter. Even though a lot of people like to keep their utensils, spices and other stuff on the counter, where they are easy to access, you cannot really do that with a small kitchen.

Instead, learn more about organization. You can actually use the cupboards to the fullest of their potential. They can hold much more than you think, and if they are properly organized, you won’t feel like everything is too crammed.

Instead of having dozens of kitchen appliances lying around, you can opt for more convenient options. There are many tools nowadays that have several uses, depending on your needs. You can have a blender, a chopper and a whisker all in the same tool for example. You may need to change the attachment, but it still saves you a lot of space.

There are plenty of kitchen appliances like that. Just find ones that are of high quality so you can actually depend on them for longer periods of time.

Instead of having tons of stuff around your kitchen, have only the things you use the most. If there are herbs and spices you only use once a year, you don’t really need an entire jar full of them. The same applies to all kinds of things.

You would be surprised how many people actually keep tons of stuff they never use. They may have a meat grinder that rarely sees any work, or some special flour that just sits in the corner. Others have enough plates and bowls to feed an army, when they are only a family of four.

The things that rarely get used may instead be stashed somewhere else, so you can feel free when you move around the kitchen. Put in the cupboards only things that you would use on regular basis. That way you won’t have clutter and the small space won’t be too much of an issue.